Why Your Workers Need A Standing Desk

Revitalise your workplace with standing desks

Around 75% of the average Australian’s workday is spent sitting down, usually, in lengthy bouts – it’s not unusual for office workers to sit for almost an entire 8-hour shift!

In the last decade, researchers have concluded that, aside from being rather boring, this way of working is a serious health risk. According to a recent paper published in the Medical Journal of Australia, the risks of prolonged sitting are so bad that workspaces without standing desk options may be deemed unsafe in the near future. Your workers’ health and wellbeing are the most essential reasons your office should include standing desks, but there are many others – ranging from boosting productivity to striking a blow for gender equality. 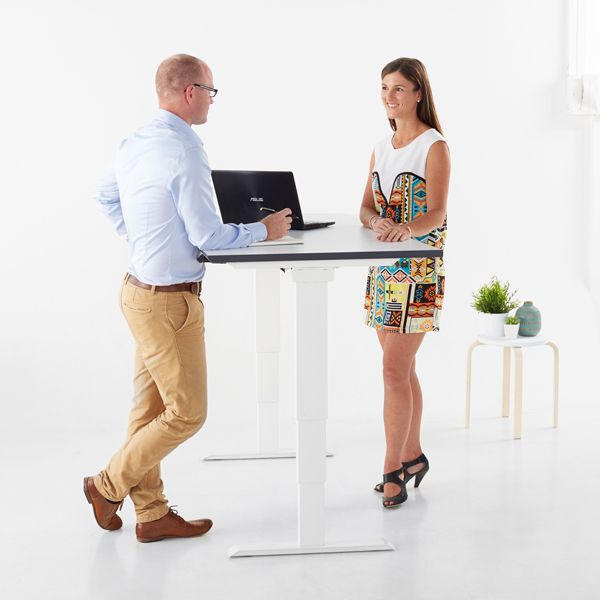 When someone eats four Big Macs or smokes two packs of cigarettes a day, it’s obviously unhealthy. But sitting down seems so harmless, especially if the sitter exercises daily. But the fact is, a little exercise isn’t enough.

Many scientific studies have shown that the risk of heart disease rises with time spent sitting. People who sit for most of the day are around 54% more likely to die of a heart attack. A study of more than 700,000 people found that prolonged sitting also increases risk for diabetes. Cancer risk also goes up, as well as the potential for back, neck, and leg problems.

Sitting too much can also kill your flexibility. When you’re sitting, the electrical activity in your legs more or less shuts down. Over time, this tightens the hamstrings and hips, limiting your range of motion and flexibility. Not only does this affect lifestyle – compounding health problems by making an active life more difficult – it also increases your chance of injury.

Helping your employees develop healthier working habits will directly aid your business too. You’ll end up with less paid sick days and less chance of a medical claim landing at your feet. Studies have shown that such claims drop when offices adopt ergonomic office solutions.

Alternating between sitting and standing while at work doesn’t just improve workers’ health, it also boosts productivity. This has been recognised by some fairly successful businesses. Google offers employees the option of standing desks while Facebook has more than 250 employees using standing desks.

Many venture capital firms have also adopted standing desks as they’ve found they lead to more ideas and more active sharing and collaboration. There’s a reason for all this – when you sit for long periods, your metabolism slows. One of the effects of this is that less fresh blood and oxygen get to your brain. So, that brain-dead feeling you get at three o’clock every day is your brain going partially offline because it isn’t getting enough of what it needs to function at full capacity. Keeping more active at work also helps prevent post-lunch digestion naps by boosting metabolic activity.

Standing up for women’s rights

The design of most fixed height furniture to suit the average male is one of the subtle ways women are disadvantaged in the workplace. Women are, on average, 5 inches shorter than men and this leaves many with desks that don’t suit them well. The best solution to this is introducing adjustable standing desks – half your workforce shouldn’t be uncomfortable at their desks!

Attract and retain the best staff

The best employees are intelligent, resourceful, and forward-thinking. It’s not surprising that many informed employees have started creating their own standing desk ‘hacks’ since reports about the dangers of sitting began to emerge.

We serve companies throughout Australia for standup desks and many more work-related products. For more information about standing desks, talk to Elevar today.

Signup to be the first to hear about exclusive deals, special offers and upcoming collections